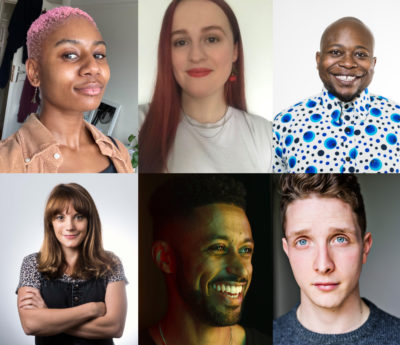 Stockroom is a writers room for theatre, and the Stockroom Artists produce new work for midscale stages around the country.

It is Stockroom’s mission to create the best new work for the midscale, working with diverse artists to develop and workshop new projects. We are investing time and expertise to create exciting, high-quality projects that are valued by our partners and over which audiences feel ownership and pride. Stockroom makes space for people from all backgrounds and place their voices at the heart of our work. We are still learning, and we will make mistakes, but every decision we make and every piece of theatre we create will be political and radically developed, regardless of topic.

Maheni Arthur is a writer and visual artist from South East London. She typically writes poetry and prose about her own life; themes of mental health, relationships, nostalgia, and the complexities of human experience are all constants in her work. She is currently part of a poetry collective and has performed at a number of spoken word events and festivals over the years

Georgia is originally from Newcastle and moved to London to study Drama and Theatre Arts at Goldsmiths University, where she graduated with a first-class degree. She completed a placement at Arcola Theatre worked with the London Student Drama Festival that was performed at the Duchess Theatre and worked on three shows during the 2018 Edinburgh Fringe Festival. During lockdown she completed a screenwriting course.

Georgia says – “I am thrilled to have been selected for Stockroom and to get the chance to collaborate with an incredible company. To me, this is not only an opportunity to contribute my own style and ideas, but to develop as a writer alongside other creatives. I really look forward to seeing what we can come up with!”

Tonderai Munyevu is an actor, writer and director for stage, screen and radio.  Amongst his many critically acclaimed performances as an actor are Two Gentlemen Of Verona or Vakomana vaviri veZimbabwe (Two Gents/ Shakespeare’s Globe), Sizwe Banzi Is Dead at the Young Vic (and tour)  and Black Men Walking at the Royal Court (and tour) and his role as Peter in the film Something Nice From London (Latimer Films). He is the co-artistic director of Two Gents Productions. His writing includes Mugabe, My Dad and Me (York Theatre Royal/ETT), The Moors (Tara Arts Theatre/ Two Gents Productions), Harare Files; How 700,000 People Lost Their Homes (written with Sarah Norman), Zhe [noun] Undefined (written with Antonia Kemi Coker and Chuck Mike) at Soho Theatre; the  short radio play A Tranquil Mind (BBC Radio 4) and various prose pieces including The Visiting Hours;  A Dispatch From Zimbabwe (Johannesburg Book of Reviews), Bullets (Team Angelica) and On James Baldwin (Queer Bible.) He has been shortlisted for The Alfred Fagon Award 2019, is part of the HighTide Writers Group, and has received The Peggy Ramsay Foundation Grant for his latest play Black Farce.

Tonderai says – “I am honoured and thrilled to be part of the Out of Joint Stockroom. To be aligned with other varied creatives, putting our minds together in response to these very significant times we are living through. I know the work will be rigorous and groundbreaking.”

Vikki Stone is an award-winning comedian, as well as a writer, composer, and actor.  As a writer and composer Vikki’s debut musical #ZoologicalSociety has been commissioned by Theatre Royal and Derngate, Northampton, alongside a concept album of 11 songs recorded by the London Musical Theatre Orchestra and stars Jason Manford and Sharon D Clarke, which was released last year. She was due to write Aladdin for The Lyric Hammersmith in 2020, but this will now open later this year. Other notable works include: Concerto for Comedian & Orchestra which premiered at Glastonbury Festival and Southbound, a female-led comedy musical that has just been optioned for theatre. She had recently made her solo tv writing debut, with a new short film for the BAFTA award-winning BBC Ten Pieces, which makes classical music accessible for young people. As an actor and comedian, her TV appearances include Richard Osman’s House of Games for BBC2, BBC Three’s Uncle, BBC1’s Len Goodman’s Partners in Rhyme, ITV2’s Safeword, BBC1’s The John Bishop Show. She has voiced Bad Robots for E4, Blink for Channel 4 and Impractical Jokers for BBC Three. Vikki is a regular writer and performer on BBC Radio 4’s The Now Show, as well as being the writer and presenter of BBC Radio’s 3’s Proms Podcast.

Vikki says – “I cannot wait to be part of the first team to work this way in UK theatre, and I’m very much looking forward to what we come up with together!”

Isaac Tomiczek is a writer & director.  In 2020 his short film Vacant Base was commissioned by Channel 4’s Random Acts as part of their Black and Proud season. Isaac directed the short film I Just Stabbed Someone for BBC Teen Monologues, produced by Unstoppable Film and Television and his play Rebel Yeah, was part of Vaults Festival. Isaac’s original feature is in development with Joi Productions. In 2019 he was a JBA awardee, utilising the grant to develop his short film, BAPTAZIA, as a feature film. Isaac was also one of twenty international writers chosen for the UGC writers campus at Series Mania in Lille. Isaac is Head of Film and Motion for POCC – a collective working to positively change the experience of people of colour within the creative industries. In 2018 his original TV drama pilot “Afters” was longlisted for the BBC Drama Writers Room. The first two films, of Isaac’s mind-bending Shut Eye short film trilogy have gained cult followings at international festivals and been selected as shorts of the month on multiple platforms. Both are now licensed to the online horror channel ALTER.   Isaac has twice been shortlisted for the Film London/London Calling short film awards whilst his writing and plays have been selected for competitions and festivals by Talawa, Arcola, Southwark Playhouse, Stratford Arts and Bush Theatre. Isaac’s work has earned him a large YouTube following with clients including Universal, Sony, Beats By Dre, and Ministry Of Sound. In 2015 his video for Sam Feldt “Show Me Love” was Screen Nation nominated and came 2nd on Promo News most viewed (behind Beyoncé). He has been selected to join BFI Network x Bafta crew 2021, and The School of High Tide 2021

Isaac says – “I am thrilled to be joining Out of Joint at this stage in my journey as a writer.  They have a reputation for producing thoughtful, ballsy, bold and artistic work, which often captures the zeitgeist and sparks debate.  At a time where theatre’s absence is being so keenly felt, it feels like a golden opportunity and blessing to be part of something that will hopefully have a positive impact on British theatre’s future, not to mention disrupt the status quo a tad. I can’t wait to meet the writers and cause a stir.”

Chris York is a Scarborough born writer and a Mountview Academy graduate. His play Build a Rocket toured the UK in 2019 and was published by Methuen. It was Richard Jordan of The Stage’s “Best new British play of the year”. The Stephen Joseph Theatre commissioned Chris’ play All Delighted People which celebrated forty years of youth theatre in Scarborough. He adapted and directed Edgar Allan Poe’s classic The Pit & The Pendulum for Creation Theatre in 2018. His short-plays include; Jimbob (The Arcola), 212 (The Bunker/Soho), A Million Little Hands (The Arts), Seven People (The Arts), Act 6 (Rosemary Branch), Jesus is a Rochdale Girl (The Last Refuge), Drafts (Southwark Playhouse), Don’t Show this to Cheri (Stratford East).

Chris says – “Joining Stockroom is a game-changer for me. It feels seminal. Not only does it give me a new outlet to help tell stories, but also to connect with like-minded artists. I don’t doubt we will become collaborators and creative allies beyond our time with Out of Joint.”