Close Up on Close Quarters

Lizzie Corscaden is a student at one of our Associate Universities, Royal Holloway. As part of the Associate programme Lizzie joined us for a four-day development workshop for our upcoming play, Close Quarters. Writer Kate Bowen and director Kate Wasserberg worked with actors and stage combat experts to get the script to the next level, trying out scenes and ideas so that when we go into rehearsals this summer with the real cast, the play is brilliant and exciting as possible. 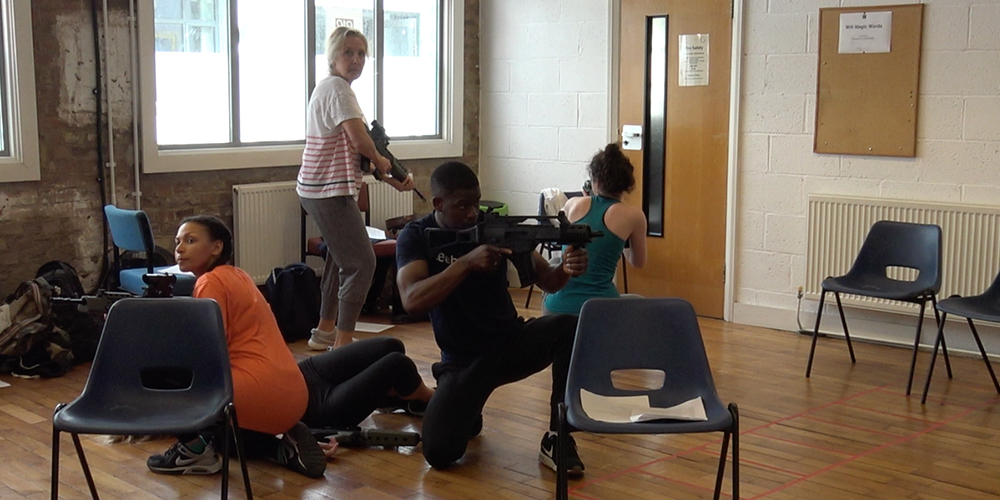 Actors practicing with machine guns in a rehearsal room

It’s 11am on the first day of my internship at Out of Joint, and there are six guns pointed at my face. Needless to say, this wasn’t quite what I’d expected.

Don’t worry, I hadn’t blown up the office, killed Dunbar the Out of Joint cat or even made a below par cup of tea; the guns aren’t real. I’m sitting in on a workshop with stage combat specialists RC-Annie, who are teaching a group of actors how to walk, talk and shoot like a group of real soldiers. They’re incredibly thorough, and the first twenty minutes of my day have been spent sipping a cup of tea while everyone else sweated their way through a military work-out (definitely something I could get used to). Then it was on to marching, hand signals, and how to load a gun. Over two hours I’ve seen the actors go from slumped on the floor with Dunbar to carrying out a covert operation in a war zone created out of a pile of plastic chairs. This was the opening session for a week-long workshop Out of Joint’s upcoming play, Close Quarters. When I arrived, a survivor of university exam season, the production team were ready to bring in actors to start playing with the script. By seeing it up on its feet, and hearing the characters speak, they can take the project to the next stage of development. It’s a thrilling process; scenes are edited before my eyes, emotions change with a snap of director Kate Wasserberg’s fingers, and, on one fateful morning, a private is suddenly promoted to NCO, much to the (feigned) outrage of her colleagues.

As a budding playwright myself, watching Out of Joint’s creatives at work has been incredibly enlightening, and my small notebook soon proved inadequate. Kate leads a series of exercises designed to generate new material, and to examine how existing scenes look and feel off the page. In one of my favourites, the actors were recorded conversing about topics pertinent to the play, which I then transcribed for them. This not only revealed a glut of information about speech patterns in social situations, but also, in a conversation about arguments, prompted the director to confess to once attacking her friend with a duvet. Luckily, the office is a duvet-free zone, so I should make it to the end of the week unscathed. It’s not all guns-blazing fight scenes: in between discharging of AK47s at enemies, relationships are put through their paces. One afternoon, the actors perform an extended improvisation. None of them are allowed to leave a “room” (again made of plastic chairs – they’re very versatile), but, throughout, are passed notes by the director, detailing the various stresses their characters are undergoing. For example, one soldier is ‘sick of the girls bickering’, while another thinks they ‘may have seen someone die’ earlier that day. Despite one character’s desperate attempts to lighten the mood with a hilarious game of ‘Would You Rather’, the tension soon becomes ready to cut with a knife. I’m on the edge of my seat as two friends I’d already become emotionally invested in begin to argue. I’m so caught up in the action that, when one girl pretends to vomit into the bin, I have to stop myself from jumping up to hold her hair back for her.

However, as exciting as the goings-on of the rehearsal room have been, they are not what has impressed me the most about Out of Joint: that has occurred around the large meeting table. Throughout my few short but incredible days here, I have had the chance to sit in on meetings about scripts in production, upcoming projects (no spoilers!) and even discussions of the current theatre scene. What has struck me most is the sheer amount of knowledge, energy and pure passion on display here, and, I promise you, great things are coming from this company.

Find out about Close Quarters.